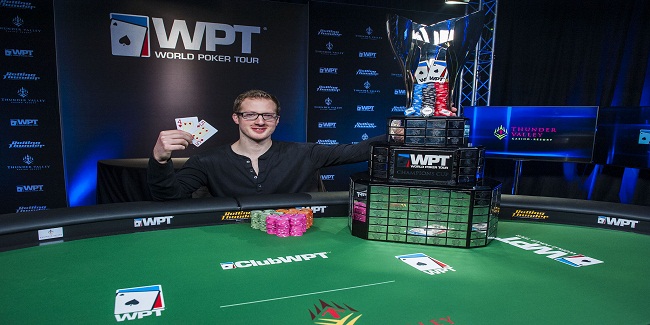 The tournament attracted 421 players, but it was Del Vecchio who did the job and collected first prize. Sorel Mizzi becomes runner-up of the event and took home $190,105, while third position of this seasons world poker tour Rolling Thunder main event belongs to a pro poker player named Steve Tabb, who took home $122,296.

Del Vecchio was very exicited and happy after winning this prestigious title. He said that I always dreamed of something like this and I’m very happy that I have done this for me. This is very exciting. He drew tears in his eyes.
Del Vecchio now has got his seat booked automatically for season ending world poker tour tournament of champions. The buy-in for the championship would be $15,000. That tournament will take place at Seminole Hard Rock Hotel & Casino in Hollywood.

Meanwhile mentioning his opinion about going Florida to participate in WPT Borgata Poker Open champion, he said that he did not had intension to go to the place, but my friend Jesse Sylvia asked me that he really wanted to play the tournament of champions with me, he said.

Some of world best players like Connor Drinan were at the final table of the game. But he left the field for rest of the players in early stage of game. Drinan busted to sixth place and collected $52,222 from the tournament.

Olivier Busquet was the nenxt man to hit the rail he busted to fifth place and pocketed $63,013 from the championship title, while fourth position of the match goes to a pro poker player named John Hadley. He pocketed $81,930.