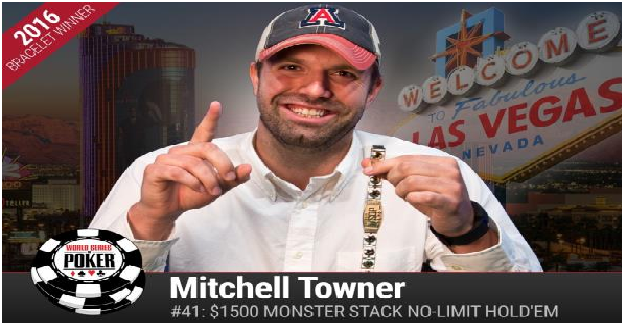 Mitchell Towner, a 29 year old University of Arizona college professor and poker player from Salt Lake City, UT has won the prestigious $1,500 by in “Monster Stack” at World Series of poker 2016. The event was #41 out of #69 of WSOP 16, to which Towner did great at the end of the day and collected his first ever gold bracelet of the series.

The player took home a massive $1,120,196 as winning prize, whereas the runner up of the game was Dorian Rios of Anquo, Venezuela, who collected $692,029. The tournament attracted 6,927players from the entire world, but it was Towner who did well to win the gold. This was the first cash for the player at WSOP and first final table appearance. All time money for the player playing at different WSOP tournament is $1,120,196.

Towner was indeed very happy to win the first gold bracelet of his career. He said that in old days, when I was young and a student I was not having any money to spend, this is simply incredible. He also said that I have played two games till date, to which the buy INS were less than $100.

The 29 year old guy is graduated from university of Texas and had his PhD in finance. The part time player decided to participate in $1,500 buy-in No-Limit Hold’em “Monster Stack” tournament, and he succeeded. The game took over for four days ad three nights at Rio, in Vegas and concluded on ESPN main Stage.

Towner also said that I was here to attend a conference related to my financial work, but thought to play one event at WSOP. The hugh field size generated a cash prize pool of amount, whereas top 1,040 places of the event got paid.

A pro from Vegas Andrew Moreno was at sixth position for, Canadian David Valcourt got seventh place and took home$167,838. Meanwhile eighth and ninth positions were for Marshall White and Cody Pack, and they collected $129,197 and $100,185 from the tournament respectively.