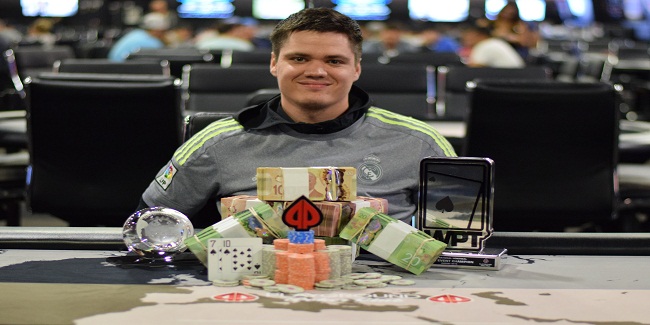 The tournament received 817 entries from various parts of the country and world but it was Hall who did well till the end of the final table and was crowned as the champion of the event.

The heads up of the game was in between all and Jeffrey Cormier, but after playing more than 90 hands the battle was won by Nathan Hall. He kept his momentum up in the game and never looks back.

Jeffrey Cormier   becomes the runner up of the event after a tremendous fight Vs hall, but it was hard luck for him. By the way he collected and amount of C$55,792 or US$42,402, being second.

Eliminations from the final table of World poker tour national Montreal was as follows:-

The first man who hit the rail was a pro named Senthuran Vijayaratnam. He got busted to sixth position and made C$15,000 ($11,400) from the tournament’s main event. He got busted due to Hand #6 to Jason Mandanici-Turcot.

Following him a player named Michael Mellor got busted to fifth place for C$18,000 ($13,680). Meller was looking good at a moment, but just after a few hands he had to go, because of Jeffrey Cormier call.

Alexander Villa becomes fourth in the game and pocketed almost C$23,500 from the tournament. Villa began the final table as a chip leader, but couldn’t be able to capitalize things in his favor and busted to fourth place.

The heads up was among Nathan Hall and Jeffrey Cormir. The play was on for at least 92 hands and then the winner was decided. Nathan Hall wins the title for C$80,000or $60,800, meanwhile Cormier took home C$55,792.