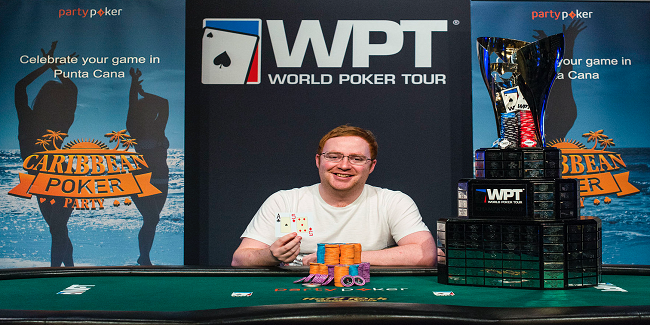 The main event of Season XV of world poker tour Caribbean belongs to Niall Farrell. The tournament attracted 323 players, but it was Niall Farrell who played brilliantly till the end of the day to collect the first prize of amount $335,000.

He also got his seat booked for $15,000 buy in world poker tournament of champion, which would take place at Seminole Hard Rock in Hollywood, FL in April 2017.

The runner up of the event was Troy Quenneville, who pocketed $220,000 from the final table. The final table of this particular main event included some of top seeded players such as Niall Farrell, Anthony Augustino, Stephen Woodhead and Yiannis Liperis.

The first player knocked out from the final table was Stephen Woodhead, who made $66,000 from the tournament for his sixth position, whereas just after his removal from the game another player named Yiannis Liperis hit the rail for $80,000. He completed his journet at fifth position.

Colin Moffatt was the man who got busted from the game and couldn’t move forward in the journey. He took home a good total of amount $105,392 from this particular world poker tour.

Meanwhile third and second positions of the match belong to professional poker players named as Anthony Augustino and Troy Quenneville. They both pocketed amount of $140,000 and $220,000 respectively before getting out from the game.

The heads up round of the game completed just a single hand#74 of among Niall Farrell and Troy Quenneville.

Some other notable players couldn’t make themselves throught to the final table were Keven Stammen, WPT Champions Club memberwho was busted to eighth position, Ari Engel who was out to 22nd place, Ankush Mandavia (27th), and Sam Greenwood (30th).