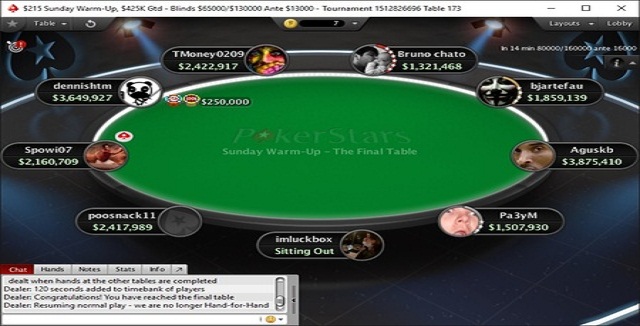 Bjartefau , a pro from Norway won the Sunday Warm Up event took place on 3rd March 2016, which attracted 2,456 and generated a cash prize pool of amount $491,200. Bjartefau took home $77,610 as winning share, while the runner up of the event was an Australian imluckbox, who received $58,290. Out of total entries top 360 places were paid for this particular Sunday Warm up event took place on PokerStars, the world’s leading online poker portal.

“poker@luffyD”, the guy who did really well back in 2013 at WCOOP Event#2 was also a participant and completed his journey to fourteenth position to collect $2,505 as winning share.

It took eight hour to decide which ten players would be in business at the final table of this week’s warm up event. Here is the seat structure and chip counts for the players.

First elimination from the final table was of poosnack11. The player got eliminated just after three hands of play took place in final table. He was having Q♦Q♥ besides of Dennisthm’s K♠A♦ and knowcked out to ninth position for $4,175.

Then just after a couple of hands it was Spowi07 who hit the rail for eighth position and collected $7,122 as wining share. Five hands later Brazilian Bruno “Bruno chato” Nunes failed to maintain the pace and was at seventh position with total $12,034.

The heads up took place among bjartefau and imluckbox. At that time bjartefau (17 Million) was having a hugh chip lead over imluckbox (7.5 Million). bjartefau had A♥9♦ and imluckbox had J♥J♣, to which the board was 3♣ K♥ 7♠ 5♥ 8♠ meaning bjartefau is the winner and would take home the first prize of amount $77,610.