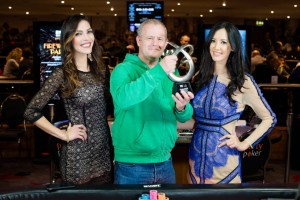 fun but he is a winner now of the PartyPoker Presents WPT500 Dusk Till Dawn poker festival.

The championship was underway from October 31st to November 3rd of the year 2015 to which Harris did great and won the first prize of $234,594.

Total 1,616 players were participating in the game for which the buy in was £550. The event has a guaranteed cash pool prize of £1,000,000, distributed to other 160 players as their positions accordingly. By winning one of the largest poker festivals in the United Kingdom, Mr. Harris has confirmed his seat for WPT UK Main Event.

The runner up of the main event WPT500 Dusk Till Dawn was a player named Yani Yanev who got his share of winning total as $142,113.

Harris told reporters that he can’t believe that he is a winner of this poker festival and it’s just great for me. In his words “I still can’t believe how quickly it went”.

Here is final table Payouts for the WPT500 Dusk Till Dawn.

Some other players according got cash prizes according to their ranks are as follows:-

Read latest poker news and reviews here at realpokeronline.co.uk. We always try to give you the best of the poker industry news and related things here, only for you at your place.