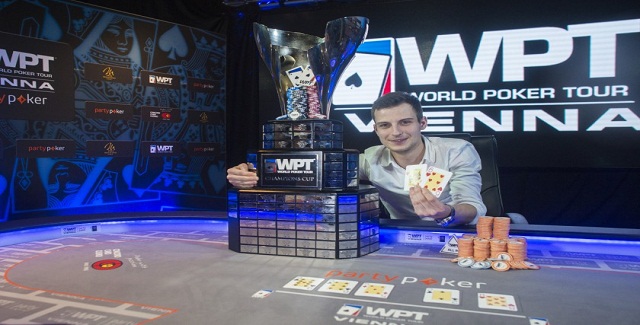 It was a great day for the Romanian Pro poker player Vlad Darie. Darie won the prestigious World poker tour Vienna title and added a good amount of € 170,800 in his account.

The player defeated Hungarian Zoltan Gal, who collected € 109,340. Gal is very good at WPT clashes and has some good cashes with him playing at different tournaments. This win gives Darie a chance to participate in WPT Tournament of Champions as well.

Please take a look at the final table of the game:-

On the Final day of the game top 6 players remained in the match and they all were eying to win the title. The players were Vlad Darie, Zoltan Gal, Matt Davenport, Dietrich Fast, Dominik Bosnjak and Georgios Zisimopoulos.

It was Georgios Zisimopoulos, who hit the rail after 28 hands took place since the game started. He never returned and finishes his journey to sixth position with an amount won € 31,500. Just two hands later another casualty happens of player named Dominik Bosnjak (€ 39,360).