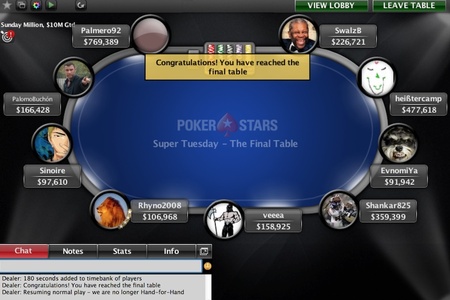 Russian Artem “veeea” Vezhenkov won another Super Tuesday event at PokerStars and collected the first prize of amount $93,290.The $1,050 buy in No Limit Hold’em Super Tuesday, is one of the most popular poker events at internet since its beginning. This is a weekly event hosted by PokerStars which attracts thousands of poker players every week.

Vezhenkov is a professional poker player from Russia and has won multiple Super Tuesday events till date. Some of them include SCOOP Title back in 2013, another SCOOP title and a Sunday Million back in November 15, and now he simply won another Super Tuesday for $93K.

It took six long hours of the game to decide who’s in top 63 and almost eleven and half hours to finish the game.

Final table set after almost ten hours of the game took place and it is like:-

German SwalzB was at seat#1 with chips. Austrian Timo “heißtercamp” Pfützenreuter was at seat#2 for 477,618 chips. Russian EvnomiYa was at seat#3 with total 91,942 chip counts.

It just takes more than 45 minutes to next eliminations. The first elimination took from the final table was of Slovenian Sinoire for $8,150. He caught against “Palomobuchón” Gonzalez and got busted to ninth place.

Just after two hands Pablo “Rhyno2008” Nerro made himself through to the rail and collected $11,047 and finished to eighth place. He loses the hand against SwalzB.

On very next hand Russian EvnomiYa got busted playing against Shankar825. EvnomiYa finished to seventh and got $15,957 as winning share.

Timo “heißtercamp” Pfützenreuter booked to sixth position and took home $20,867, and Shankar825 booked for fifth position and went home with an amount of $27,005.

German SwalzB made $38,298 from this particular super Tuesday being at fourth position.

Gonzalez was leading the three handed game till few hands but after some time he just couldn’t be able to manage the board which was 4♣8♠3♠Q♣Q♠. He showed T♦T♠ but Vezhenkov had A♠4♠ and sent Gonzalez to third position.

It means the heads up was among:-