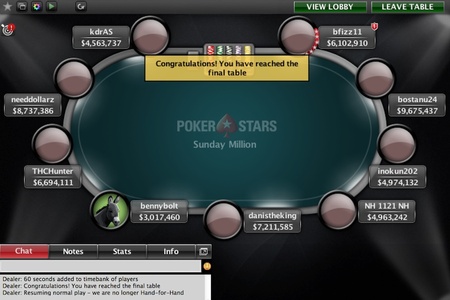 Needdollarz, an online poker player from Russia has won the latest edition of Sunday million event at PokerStars. The event took place n 6/26/16 and attracted 5,594 players from the entire world. The prize pool generated for the tournament was $1,118,800 and top 810 finishers got paid.

The $215 buy-in No Limit Hold’em or best known Sunday Million, is one of the most popular poker tournaments at the internet, since it’s becoming. The tournament attracts thousands of professional poker players every Sunday.

The first elimination from the final table was of Japanese inokun202, who got $8,950 as winning share, just after is removal from the game it was bennybolt of Canada hit the rail to eighth position for a total winning share of amount $13,985.