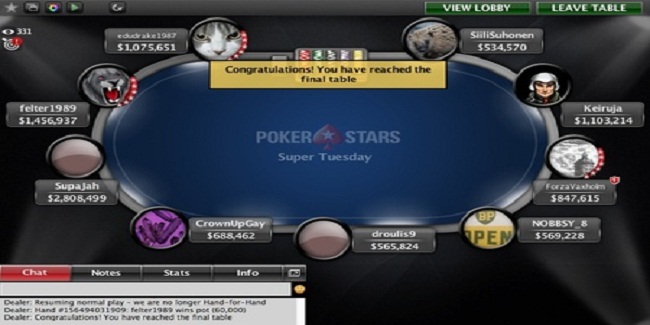 Russian pro poker player named SupaJah wins latest Super Tuesday event played on PokerStars on 7/26/2016 and collected the first prize of amount $69,954. The event is a $1,050 buy in No Limit Hold’em, which received 386 entries and generated a prize pool of amount $386,000. Top 55 places of the game took home some amount of money as cash prize.

The final table was decided after almost nine hours of game took place at the table and it was like follows:-

First elimination was of Australian NOBBSY_8, who made $5,960 from the table and then goes SiiliSuhonen of finland with amount $8,109.04 for eighth position.

Swedish Kent “ForzaVaxholm” Lundmark was able to do good but somehow got busted to seventh position for a total share $11,032,whereas Brazilian edudrake1987 collected $15,009 being sixth.

First 15 minutes of the game was for the winner of the game i.e. Supajah. He kept his momentum up till the end of the game and was able to collect the first prize of amount which was $69,954, meanwhile the runner up collected $51,418.