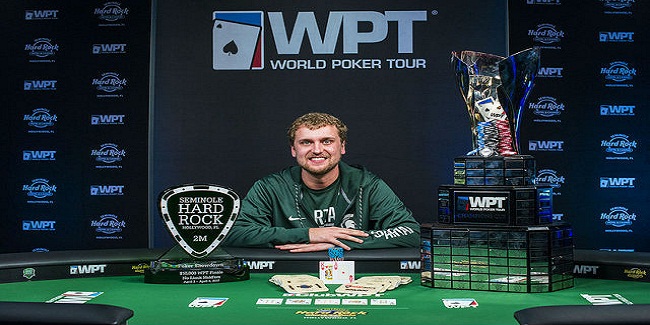 The runner-up of this particular world poker tour event was another US poker pro named Alan Sternberg, who pocketed $491,081 from this $10,000 buy -in Main event.

First player busted from the final table of 6 players was Cliff Josephy, who took home a good total of amount $130,370 for his sixth place.

Jason Koon, another top professional poker player who has played some great poker busted to fifth place for a total winning share of amount $157,599

Fourth and second positions of this crucial match belong to players known as Tim West and Terry Schumacher. They pocketed $204,466 and $315,726 from the tournament respectively from this tournament.

That means top two players remained in business were Alan Sternberg and Ryan Riess, but it was Ryan Riess did the ultimately and pocketed the first prize along with title of the championship.

Riess this time topped a field size of 349 players. The event was $10,000 buy-in No Limit Hold’em Main event took place at 2017 World Poker Tour Seminole Hard Rock. This is his first world poker tour title, while second largest score of his playing career. His lifetime poker earnings are now over $10 Million.

The result is as follows:-