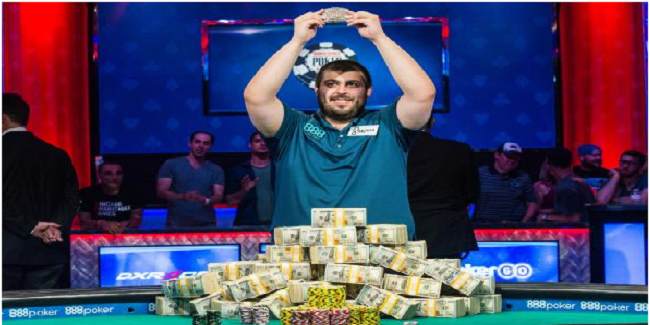 Scott Blumstein, a professional poker player from the United States has created history by becoming the latest champion of 2017 World Series of poker Main event.

The world poker got its fresh poker champion in the name of Scott Blumstein. The player pocketed a sum total of amount $8,150,000 from this grand poker tournament which took place at Rio in Las vegas.

Blumstein was very happy after winning this grand tournament for himself. He said to the reporters post match that I don’t have an ego in this game,” he added “I know where I stand. He also said that I was a player from New Jersey just checking out online games but this has totally changed. This is just one poker tournament.

Dan Ott, a professional poker player from Altoona, Pennsylvania becomes runner-up of this game for a total winning share of amount $4,700,000, while third position of the game belongs to a poker player from France named Benjamin Pollak, who was able to collect a whopping $3,500,000 from this great tournament of 2017.

As you remember a total number of 7,221 players participated in this particular main event of 2017 WSOP, which is third largest main event in the history of the world series of poker and the biggest field size since 2010, but only nine players remained in business for the final table of the game.

Thousands of poker players received some amount of money from the tournament, but only few were able to collect some decent amounts.

The final table chip lead on final day of the event was as follows:-

When the final table began, only one player was close to Scott Blumstein and he was John Hesp of Bridlington, United Kingdom. He was looking forward to make a change and to create the history but unfortunately he couldn’t do so and completed his journey at fourth place.

The first player who hit the rail at the final table of this game was Ben Lamb of the United States, who won $1,000,000 from the tournament being ninth.

Next man hit the rail was Jack Sinclair of the United Kingdom who made $1,200,000 from the tournament for his eighth place.