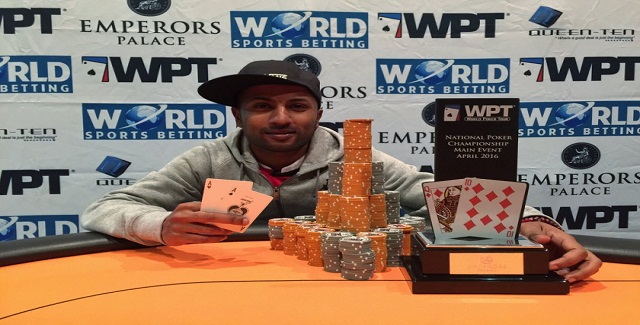 Shaun Naidoo, a pro poker player from the cape town won the prestigious world poker tour national Johannesburg main event and collected $43,333 as winning share. The player defeated Rocky Brooks, another countryman who booked for $34,060 and was satisfied being runner up.

WPT national is very popular poker festival in South Africa and that’s why thousands of poker players from around the Africa’s corner participate in such an awesome tournament. The event is very popular and got 327 entries. Out of total 29 finalists, 27 took home some amount of money of this Main event.

It was a great game and Naidoo was dominating the game since the beginning of the Main event. He played really against Brookes.

Shaun Naidoo was very happy after winning this golden opportunity and said that” I love to play here, this is the largest poker event being played in south Africa and being a championship of the Main event feels great to me”.

Please take a look at the results:–

Shaun Naidoo won the title along with the first prize which was $43,333. He played like a champ and wire to wire against all of his opponents. He made sure to avoid any certain mistakes and did have a calm and cool mind with him all the time.

The runner up of the event was Rocky Brooks with total winning share of amount $34,060.

Jonathan Kalil was awarded the third position for amount $34,248. Kalil is a pro and has don quite well till date as a poker player. He has a couple of titles in his account as well.

Prashanth Mergu was the fourth position holder with total winning share of amount $23,842.

Strauss’ got busted playing against Naidoo’s for a flip with total winning share of amount $12,436. He booked for fifth place.