The leading online poker portal in the world i.e. PokerSars has been awarded as the best online poker operator 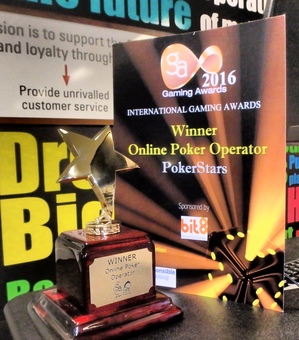 for the year 2016. This is the fourth consecutive year to which Pokerstars (Amaya Inc) is being awarded the best “online poker operator” of the year.

Eric Hollreiser, the vice president of Amaya Inc (Corporate communication), said that we are very proud to get this award in fourth consecutive year and it is really great for us.

He also applauds the independent judging panel for their judgment about giving this prestigious award to the PokerStars. He dedicated this award to millions of players and thousands of Staffs’

According to Pokerstars, they have got this award because of many good reasons and some of them are like:-

The bigger, the better and richer online tournaments made Pokerstars very viable and give them a big lead from other online poker operators.

Pokerstars was very popular in terms of spin & Go’s kind of formats and According to them more than 150 Million real money games played in the year 2015.

It just because of big tournaments like spin & Goes, World championship of online poker (WCOOP, Total 70 events hosted and $66 Million awarded to the players), Turbo championship of online poker (TCOOP), High rollers and COOP took place at the portal, which attracted thousands of real money poker players and gave the portal an edge to maintain their pace, created difference. Millions of dollars of prizes were awarded to the players participated in real money games.

If you are looking to play real money poker at internet then you are at right place. Create you players account at Pokerstars and download the client to your own computer to get great match bonuses of 100% or up to $600 here at Pokerstars only.