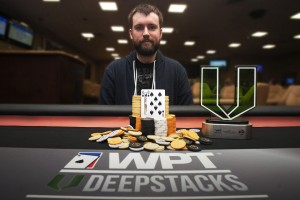 earned a very good winning total of $65,447 and topped out the field of 379 players. The event was in process at Ocean’s Eleven Casino, in California to which Daniel took home a WPTDS Trophy and collected very good prize money of $65,447.

The runner up of the tournament was Jon McGowan who got his share of winning amount a $64,746.

The tournament was in process from October 22 to October 26th, 2015. The buy in for the event of the tournament was $1000+$100= $1,100. Total 379 players registered themselves to participate in one of the best tournament hosted by World poker tour in California and the cash pool prize generated by the entrants was more than $364,630. This particular tournament/event is an open event for re entrants or one can check in for unlimited re entries to the events which seem to be a cool stuff.

Here are some other players made some money at WPTDeepStacks, San Diego, California….

Some other players who did well and took home some money are as follows:-

This was the update about wpt deepstacks passed in San Diego, California. To know more about WSOP,WPT,EPT or other world class poker tournaments, check this site out. You would never be disappointed.