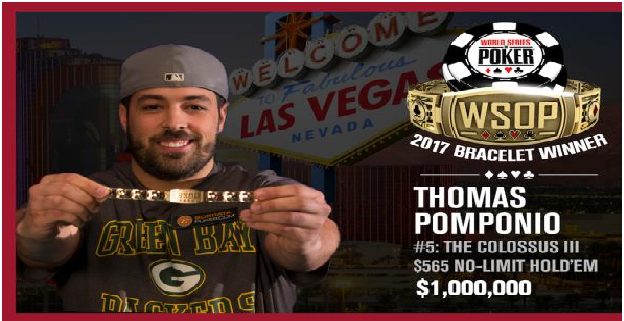 This was the first world series of poker bracelet for the player and this is simply huge. Taylor Black becomes the runner-up of the event and a sum total of amount $545,430.

This is the first WSOP gold bracelet and largest poker cash of Pomponio’s career. The four day long tournament attracted huge number of players i.e. 18,054, which is highest in WSOP history for a tournament like this.

As mentioned this year’s Colossus III event received 18,054 entries spread over for six separate days. A total of 9,074 players participated with 5,123 of those trying with $565 single entry. But 3,951 players were filed multiple entries.

Total prize pool for this event of World Series of poker topped to over $9 Million and it was $9,027,000, which was distributed among top 2,711 players. The oldest entrant to this game was Norman Spivock, while youngest entrants to the event were two players of 21 year old and they were Alexander Smith and David Somers.

The event seems to be a big hit among world poker players. That is why it attracted huge number of players from around the world.