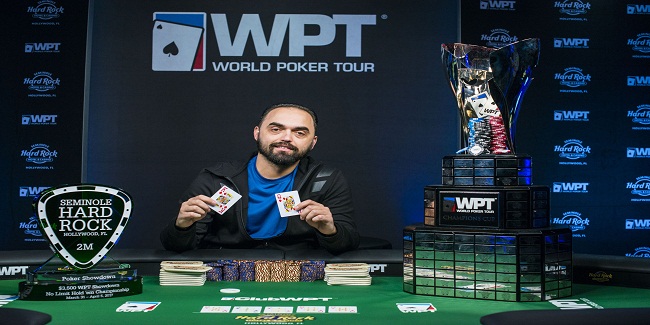 The tournament attracted 1,207 entries, but it was Sinishtaj did the job and pocketed the title of this match; meanwhile Darryll Fish finishes his journey being second in top players list.

Sinishtaj just not won the title of the match and first prize, but he is automatically got his seat booked for $15,000 buy-in Season XV Monster WPT Tournament of Champions.

That tournament will take place from April 7-9, where $200,000 is added cash and prizes. A brand new 2018 Audi S5 Coupe is also in the prize list for that tournament.

The first player busted from the top 6 players list or from final table was a player known as Simeon Naydenov. He busted from the table to sixth place and pocketed $132,889 from the game for his place.

Eric Beller was the next man who hit the fifth place and pocketed a sum total of amount $164,438.

Dan Colman was really looking very good at some moment but he was being left by the winner after a few hands. Dan Colman busted to fourth place and made $217,686 from the game.

Third and second positions of the match belong to players Robert Mizrachi and Darryll Fish and they collected $293,864 and $453,185 respectively.