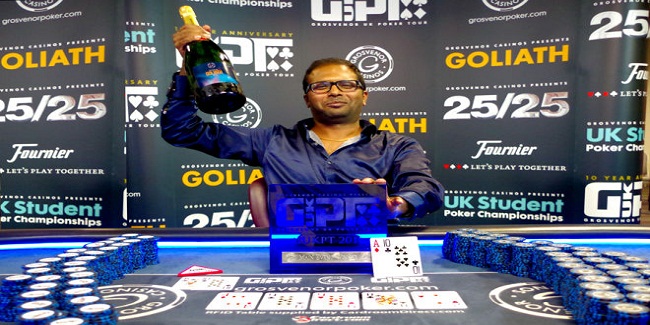 Vamshi Vandanpau has won the 2016 Grosvenor UK Poker Tour Goliath festival for £62,750. The tournament attracted more than 5,000 entrants, which was 4,210 last year.  The tournament lased for eight days and the buy in for the event was just £120.

The final table of the event included some of the best poker professional such as Jonathan Mellor, who got busted to ninth position and took home £7,400, then goes Craig Drew, who made £8,600 from the tournament being eighth position holder.

Luke Winsley was the next player who hit the rail to seventh position and pocketed an amount £10,450, from the tournament. Winsley exit left six players in the hunt for the title, but instead of doing well at a moment another player named Graeme Evans hit the rail and finished his journey at sixth position for a total winning share of amount £13,400.

Top five remained in the business and they were Vamshi Vandanpau, Robbie Richmond, Cristian Popescu, Will Campbell and Tom Powell.

A Couple of hands played when, Robbie Richmond found a pair of kings in the hole and this means a simple exit for Tom Powell to fifth position for £18,850.

Will Campbell kicked the exit door and got busted to fourth position, when he rose all in on a king with the ten five offsuit. He pocketed £27,000.

The play was in between top three remaining players and each player was playing with even stacks of around 40 Million. It means they made sure to take home at least £50,000. Cristian Popescu was booked for third place for £50,000.

Robbie Richmond also took home £50,000, being the runner up of the event and the championship title goes to Vamshi Vandanpau, who collected £62,750.