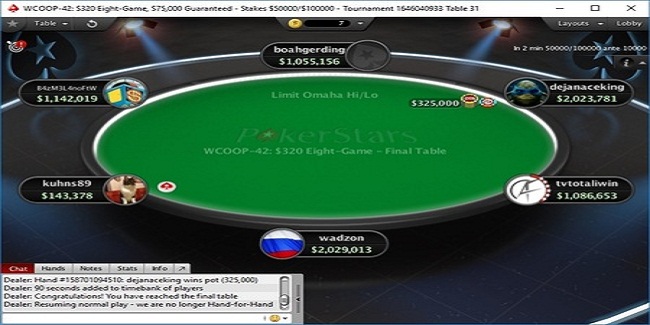 A Bosnian poker player named Dejan “dejanaceking” Divkovic has won the event#42 of World Championship of Online Poker series 2016. The tournament was of a $320 buy in Eight Game, which received 476 entries, 272 re-entries, and generated $224,400 as a prize pool.

This is Dejan “dejanaceking” Divkovic second COPP title win at this series, because he already won Event #26 of Spring Championship of Online Poker, this year.

Viktor “Isildur1” Blom, a world champion of online poker didn’t have much to express, because he completed his journey at 17th position (chip lead).

The final table of the game took place after two days of game completed and it was like:-

First player got busted from the table was an Argentinian B4zM3L4noFtW, who made $5,118 being sixth. German boahgerding made $7,646 being fifth, while tvtotaliwin, pocketed $11,423.66 being fourth.

Russian wadzon goes to third position for a total winning share of amount $17,066.

Real Poker Online provides you latest updates about poker in the UK or in the world. Do check UK Poker sites to enjoy real money online gaming either in UK or in Europe.