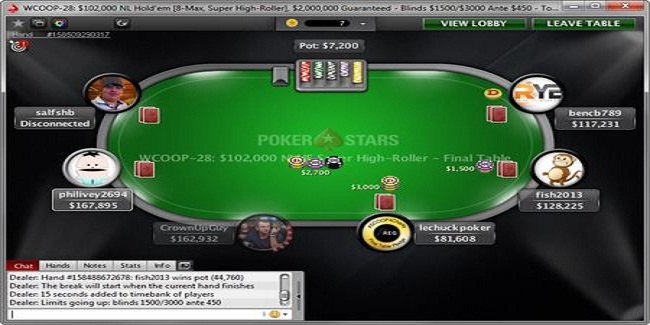 This certainly is a time to celebrate for the Swedish poker pro named bencb789, because he has done a great job by winning one of the best poker event in the world i.e. $102,000 No Limit Hold’em buy in, 8-Max, Super High-Roller of the WCOOP 2016.

This was the event#28 of the prestigious world cup of online poker, which got 28 entries from various parts of the world at the internet and generated a whooping cash prize pool of amount $2,800,000, but it was bencb789, made the difference and collected the first prize of amount of $1,172,360.60 as well as the trophy. Top 3 places of the event get paid.

But things were different after the break and jus after a few minutes; it was fish2013, got busted to sixth place, playing against Holz K♣ 2♣.

Then nearly after half an hour Isaac “philivey2694” Haxton got busted and leave the field for the rest of the players.

Now the top three players remained in the business and were looking to win the championship title were:-

The first player in the final table hit the rail was UK’s salfshb, who pocketed $560,000 from the High Roller.

Please take a look at UK poker sites for all the details regarding online poker in the United Kingdom or in the world. We will let you know every detail about this poker series as well in future.