The world poker tour UK festival will kick started on October at Dusk Till Dawn. The Inaugural Grand Prix 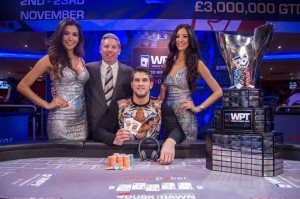 Poker Tour for the same tournament won by a poker player named Benjamin Preece from Birmingham. He won a cash prize of £35,000 at the opening ceremony of the tour.

The tournament is a 16 day poker festival for players around the world love to play. WPT500 UK is a poker tour of £1 million guaranteed.

This is one of the largest poker festivals in United Kingdom. Eleanor Gudger , A pro from London won £140,000 by just investing £500 as buy in money. The tour attracted more than 2,133 players last year.

Rob Yong and team are passionate to host another WPT UK Poker festival. The Owner of Dusk Till Dawn casino said that, the tournament was a great success last year and we are hoping that it would do really good this year as well.The combination of PartyPoker and Dusk Till dawn is awesome and it would host a great poker tournament this year as well at the top casino place in the world.

The schedule for Dusk Till Dawn Poker Festival

The Main event of the tour would be hosted as follows:-

Check out the best opportunity to make hundreds and thousands of real poker money while playing poker Dusk Till Dawn and get every bit of details at real poker online site or “here“.