The world series of poker has announced their schedule for the year 2016. The first major and popular event will be 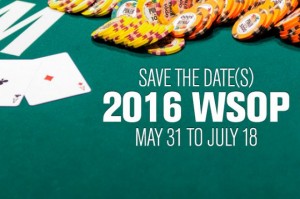 played from 31st may to 18th July 2016, in Las Vegas and at Rio All-suite Hotel and casino. This would be a 50 day long poker series/festival which includes something for every player like cash games, gold bracelets, satellite games and many others. The final day or the main event will be played at Monday, July 18 2016. This would be the largest poker event hosted by WSOP in 2016.

The event#2 of the festival is Colossus II, which is a $565 buy in reentry No Limit Hold’em tournament. It is scheduled to be played on 2nd June, 3rd June and 4th June. This year the Colossus II will have an additional $2,000,000 of guaranteed prize. It means the total prize pool is increased to $7 million from $5 million.

Colossus II was a very popular event last year which attracted 22,374 entries to the game and the winner of this event was Cord Garcia who took home a very good $638,880.

Some of the most popular WSOP events such as Little One for ONE DROP, Monster Stack and Millionaire Maker are also on the card.

Besides these events the tournament will have the main event of $10,000 No Limit Hold’em. The main event will run for ten consecutive days i.e. from 9th July to 18th July.

The Executive director of WSOP Mr. Ty Stewart has given his best wishes to everyone. He said that “We want to wish everyone Happy Holidays and best wishes for 2016,”

The first event of the tournament is of $565 buy in No Limit Hold’em for casino employees and it will be played on June 1, whereas the $1,000 senior event will take place on June 17 2016. The tournament will have plenty of (almost 60) gold bracelets for poker players looking to play and win big real money at any of the event.

This year’s tournament is likely to be another successful year for WSOP because last year there were 103,512 entrants to the festival for 68 events and they generated a hugh $210 million of prize pool.

If you love to play online poker games, we can help you to do that. Just follow realpokeronline.co.uk and you will get latest poker news and bonuses. We will also cover every bit of news and will give you the full schedule once they are available in 2016.