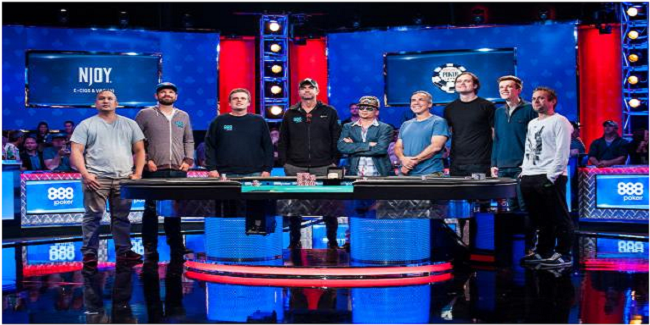 The prestigious world series of poker final table or main event of 2016 is about to start on Sunday after a wait of over three months.

Remaining nine players or so called November Niner would take their respective seats to this prestigious poker final table.

The tournament wills decide that who would be the next world poker champion in the Penn and Teller Theater at the Rio Hotel and Casino in Las Vegas.

The winner of this super series will took home a tremendous trophy, a WSOP Main event Bracelet and a whooping amount of $8,000,000 as first prize.

The final table of this festival will be played under the bright lights and will be broadcasted on ESPN.

You should remember that in early July, the 2016 WSOP Main event received 6,727 entries from poker players residing in various parts of the world and almost all of them got busted in that seven day of gaming and only final nine were able to play for final table of the main event.

Joshua Weiss was eliminated to 10th position and missed the chance to play in November.

Final nine players and their chip counts are:-

Griffin Benger is playing the final table of 2016 World Series of poker. A few days ago he had a clash on the table with Kassouf, who become a polarizing figure in poker world because of his “speech play”.

Cliff Josephy is the current chip leader and has won two gold bracelets. Here he would definitely like to win his third gold bracelet of WSOP.