The much awaited Main event of world series of poker is on the card now and it would take place on Sunday, 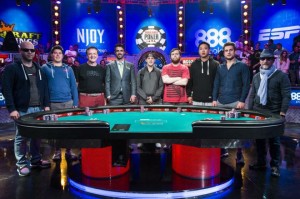 November 9, 2015. It is going to be a hugh day for all 9 remaining players ( called as  November niners) who got selected after a hugh round of tournament played for seven days in July 2015. The tournament will be televised on ESPN and ESPN2 by 30 minutes delayed on hole cards.

The time has come for the top 9 poker players of the world to win the biggest and largest poker tournament at one of the most exciting casino/poker destination in the world that is Penn and Teller Theater at the Rio Hotel and Casino in Las Vegas.

Earlier in the July 2015 there were total 6,420 player got registered themselves to participate in the main event of the world series of poker for which the buy in was $10,000 and after playing for 7 long days almost everyone got eliminated and only top 9 players remained to play for the WSOP main event at Las Vegas on November 9, 2015.

The announcement to the winner will be made on Tuesday after 2 days of game begins. The winner will take home a handsome amount of winning cash prize of $7.68 million.

The players who are participating in WSOP main Event November 9 are as follows:-