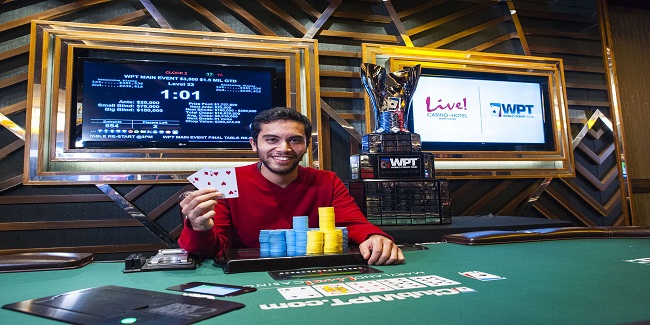 Zachary Smiley, a US poker pro has won the world poker tour Maryland Live poker championship and collected the first prize of amount $356,536.

It was season XV of Maryland Live! To which Smiley, a pro poker player has done a great job. Smiley has already won many other championships.

The final table of the game included some of the best poker players of the planet earth such as Cate Hall, who finished his journey being sixth for a total $68,554 and Mario Silvestri, who finished third in the tournament for a total winning share of amount $153,983.

It was Darren Elias’s third attempt to win this prestigious world poker tour backed title but he couldn’t make it possible and was out of the race once again as fourth player for a total $113,905.

Whereas Cate Hall was at the final table of her second consecutive WPT Maryland Live! Benjamin Zamani, another US professional poker player, who is in the race of WPT Player of the Year, was also in the final table.

This was his third final table appearance in last 10 weeks, which shows his playing form. Zamani got busted to fifth place and pocketed $85,429 from the tournament.

The heads up in between Zachary Smiley and Ryan Belz took place for just over an hour to decide Smiley will be the winner of this poker championship at Maryland Live! And he will take home the first prize of amount $356,536, as well as the trophy or the championship.

Benjamin Zamani was out from the race of the championship title. He made $85,429, being fifth, whereas Darren Elias added an amount of $113,905 to his main account being fouth position holder.

Mario Silvestri was the next player who got eliminated playing against Smiley for a total $153,983.